Posted on August 1, 2010 by markswalkingblog

Looking down at Buttermere & Cummock Water

A  round trip totalling 13.6 kms starting at the National Trust car park outside the YHA at Honister Hause.  The route covered

Honister Hause to Haystacks dropping down to Scarth Gap, past Black Sail Hut, up Kirk Fell,  Great Gable , down to Windy Gap, Green Gable, Brandreth, Grey Knotts and back to the car park at Honister Hause.

I arrived at the car park at around 7pm on a lovely sunny evening- only a couple of cars left in the car park.  Locked up and headed up past the slate mine museum and took the path left up the hill past the quarry towards Haystacks, bearing left past the Mountain Rescue hut where there were two rescue vehicles parked up.

I dropped down and crossed Warnscale Beck before a gradual climb to the edge of Blackbeck Tarn. Pausing for  awhile to glimpse the fading sun, I then moved on  past Innominate Tarn and after a short climb was on top of Haystacks with a great view down to Buttermere and Cummock Water. I managed to find a mobile signal ( Vodafone) by wandering around the top a bit and called Mary to say that I had arrived at Haystacks OK.  Deciding to avoid the problem of being practically blown off a summit on my last trip, I decided to camp back down near to Innominate Tarn, even though there was hardly a breeze ( that’s how it started on my last trip).  I found a sheltered spot, quickly pitched my Vaude Power Lizard – all of 5 minutes and sorted out dinner.

It was a still , beautiful evening and I had not seen anyone since leaving the car. As the light faded, the moon rose over Great Gable – a great end to the day.

Had a hot drink before retiring and tried to settle down for the night.  I always have a bit of trouble sleeping out of my own bed for some reason whether it’s a tent, our motor home or the endless nights spent away in hotel rooms on business. I not sure why but it usually takes me a few days away from my bed to sort myself out – unfamiliar surroundings I suppose !!

I awoke around six in the morning – quick look out of the tent, and unfortunately it was overcast – it was forecast so I wasn’t that surprised, but after the beautiful day before it was disappointing not to wake up to brilliant sunshine.   This is the Lakes, so not too many sunny days strung together.   I tried to fire up my Pocket Rocket stove, but no gas coming out of the canister – obviously low on gas, I had put the canister inside the bottom of my sleeping bag during the night to keep it warm – but the result was no hot drink this morning.  (Subsequently , I lit the stove back at home no problem). Can it be that the difference is the altitude ?  Home  is 28 metres above sea level – camp 560 metres.  I would like to know – can anyone help ?

After breakfast, I pack up quickly and I was back up on the top of Haystacks by 7.00 am.  At the top I met an old boy who said he was 80 years old and had been walking the lakes for over 60 years.  I said he was out early and he replied that he had left his home at Kendal at 2 in the morning and had been walking since 4 am – with a smile he told me that his wife probably didn’t know he was out – he had not bother to tell he was going out walking !  We had brief conversation about which routes in the area was our favorites and we both agreed that you only go down the path at Dore Head to Mosedale once – as the path was down to the ‘bare bones’ and not a very pleasant experience.  I said goodbye and took the steep path that dropped down to Scarth Gap.  On reaching the gap, the sun poked out it’s head and I took the opportunity to fill my Travel Tap bottle up in the little beck running down beside me.

I made my way down Scarth Gap Pass to Ennerdale Forest and then onto Black Sail YHA as the sky brighten up and out popped the sun for a few minutes at a time.  A couple of people were getting ready to leave the hut as I walked past but it didn’t look that busy – I understood you have to book months in advance to stay here.

On leaving Black Sail Hut I continued to the end of the forest -( hardly a forest now as most of the trees are young ).  Crossed the River Liza by the foot bridge and headed up hill on the path next to Sail Beck towards Kirk Fell winding my way up to the top of Black Sail Pass.

By the time I got to the top of Black Sail Pass – it was heavy drizzle and the tops of the surrounding fells were completely shrouded by low cloud.  Quick chat with a couple of guys just emerging from their TN Quasar tent  and headed up into the gloom, pausing for a quick refreshment and snack.  By this stage the view below had completely disappeared.

I made my way steeply up a rake which now was very slippery with rain and emerged near to the top and made my way following my Garmin GPS to the top of Kirk Fell.  Visibility now down to 2-3 metres. 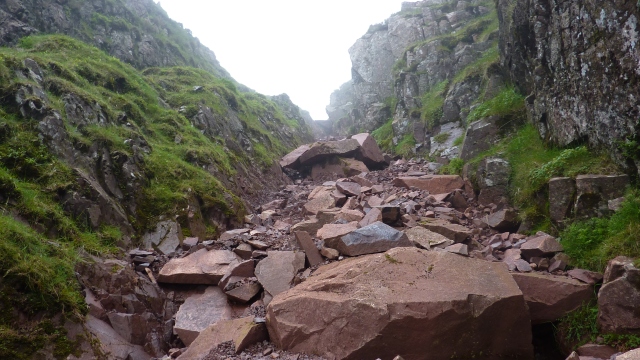 Slippery all the way up !!

By this stage it was pretty pointless taking any more photos, so I moved on – pass Kirkfell  and Beckhead Tarns where somewhere in gloom came voices and eventually I came across a group of young lads backpacking with the typical enormous backpacks that seems to be the norm for people of this age group.  May be with age comes the realisation that you can easily walk with half the weight and size of backpack !!

Headed up Great Gable – still in the gloom, I  met a guy coming down wearing the same pack as me –  the OMM Jirishanca. He stopped me and asked about the Trio Pouch attached and how was it and oh that looks easy to fit on. He said ” I’ll get one of those” and the bounded off down the mountain.   I reached the top of Great Gable and followed a bearing off the top downwards to Windy Gap and eventually emerged from the clouds with a view down Aaron  Slack to Styhead Tarn 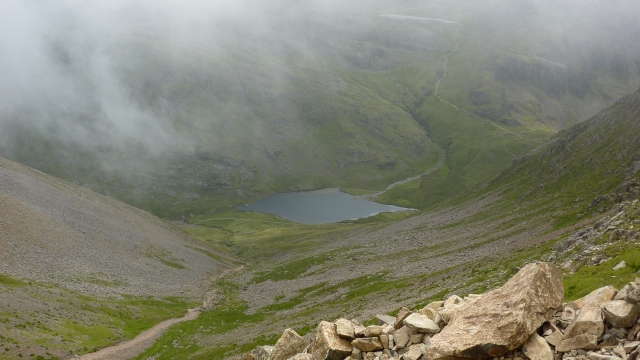 I climbed steeply up to Green Gable and shortly afterwards turn left  and headed towards Brandreth and continued over Grey Knotts.  It was around 11.30 am by this stage and large numbers of people were making their way up from Honister.  The weather closed in and it started to rain heavily.   As I was relatively close to the car by this stage I didn’t bother putting on my Montane over trousers and made my way down the increasingly slippery path back to the car park.   All in all a great little trip only spoilt by losing the views over Kirk Fell and Great Gable.