Posted on August 19, 2010 by markswalkingblog 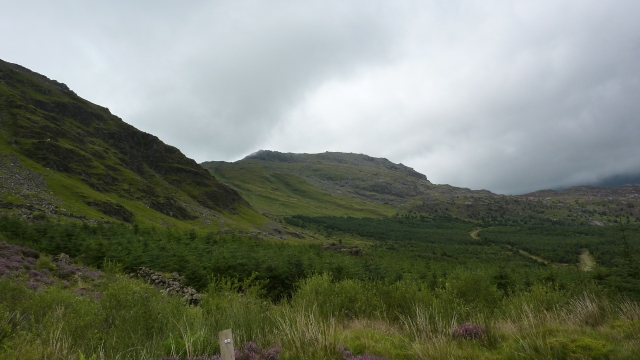 We decided that we would drive to the Forestry Commission Car Park at Beddgelert, so the boys could go off for the day on their mountain bikes riding the many trails in the forest. I decided to climb two mountains close to the car park and to meet back at the motor home later on in the day.  I didn’t want to go out all day as we were leaving Mary on her own for much of the day.  Mary doesn’t mind at the moment as she is recovering from a complication after breaking her leg badly late last year.

I left the car park and headed along a forest track following close to the Welsh Highland Railway. I crossed the railway track and heading to the farm named Meillionen.   This is where it started to get complicated. I spoke to farmer who guided me through all the drainage trenches he was digging and he said that a lot of the paths had altered due to recent felling and extensive replanting of trees. 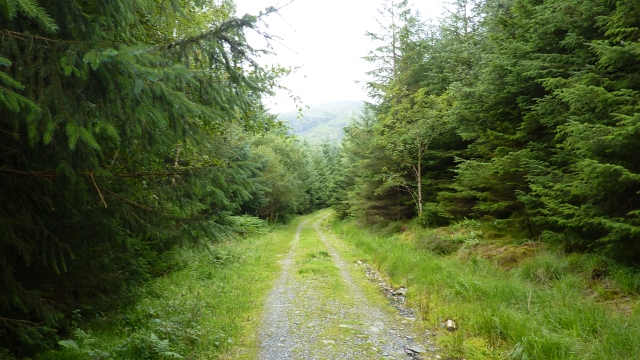 One of the many tracks in Beddgelert Forest

All I can say is, if you do this route, just follow you compass bearing or GPS as there are  numerous forest tracks and footpaths heading up the hillside, but after a while you will find a clear path up the hillside.

Much of the hill-side after this point is being replanted so it is easier to find your way than the sections where it is thickly wooded. The weather was warm and muggy and by the time I cleared the planted area, I had worked up quite a sweat.

Once clear of the forest I headed up towards Moel Yr Ogof over open ground with no clearly defined path. It was fairly easy-going on short-cropped turf studded with delicate mountain plants in flower. The ground levelled off and to the left Moel Hebog came into view after being shrouded in low cloud for much of the walk up.

Turning to the right, I walked steeply up towards the summit of Moel yr Ogof. Once I was up at the summit, I stopped for some lunch and surveyed the view.  What I had not realised at the time until I looked at the map was the cave at the base of the crags. Later on I found out that this was the cave where  Owain Glyndwr  supposedly hid from the English.

Glyndawr was the last native Welsh person to hold the title Prince of Wales. He instigated an ultimately unsuccessful but long-running revolt against English rule of Wales. 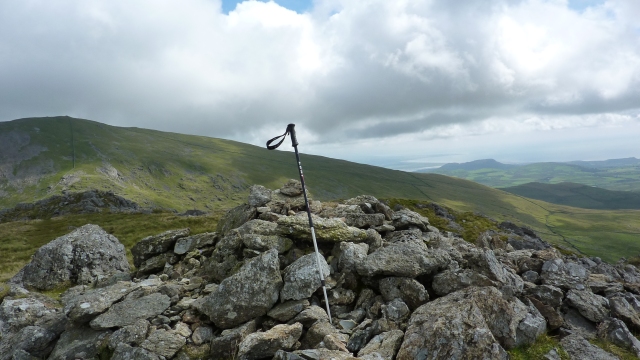 As I was on a tight schedule, I didn’t have time to go back down to explore the cave and made my way steeply down the rocky path towards Moel Lefn followed by a short climb up to the rocky summit of Moel Lefn.

Turning north from the summit I made my way down off Moel Lefn towards Princess Quarry which is now disused.  The strong wind was left at the summit and once out of the wind, it felt warm in sun which had appeared now the clouds had cleared.

There was not much signs of the disused quarry other than a big hole in the ground.  Nature had now reclaimed back the landscape  softening the hard edges of human activity. 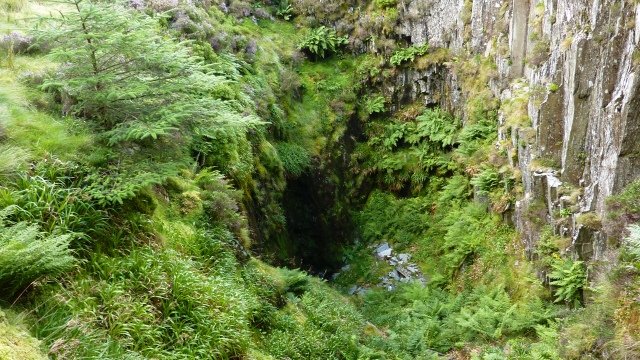 Hole in the ground !

Leaving Princess Quarry, I was straight back into the forest, with the same problem of route finding as before , but with the added problem of very boggy conditions after heavy rain.  Not long after entering the forest, the path I was on seemed to disappear, so I walked on an easterly bearing. Looking around the dark forest, I proceeded to step right up to my knees in a boggy morass.  I squelched my way out of the bog and found a small stream to follow – to try to find my way out.  Eventually I found the small lake – Llyn Llywelyn and after walking one side of it turned right and followed a track back over the level crossing and then left back to the car park.

A walk of much variety, but with difficult navigation in some sections of the forest.

Back to the motor home