A frustrating  night’s sleep of blowing up my sleeping mat and feeling it deflate gradually a number of times gave way to a rather windy morning.  I was away quite quickly after breakfast as the weather forecast for today was pretty poor – rain and lots of it.  At least it was reasonable as I crossed back over the meadow heading towards the Pennine Way. I passed the Pen-y-ghent cafe and resisted the temptation of a second breakfast!

Heading back towards Pen-y-ghent

Back on the Pennine way heading north, the climb was quite gradual out of Ribblesdale.  After about 20 minutes of walking, I felt the first drops of rain splatter on my backpack.  Always the optimist that I will be able to carry on for ages before needing to put on my jacket, I lasted about 10 minutes as the rain got harder and harder.  It would turn out to be a very wise decision taking my Paramo jacket as this was the start of rain that was to last around 5 hours, non-stop. In the space of 48 hours, the weather had gone from flaming June to soggy  and cold March,except this March was not soggy at all or cold.  What has happened to the seasons these days? 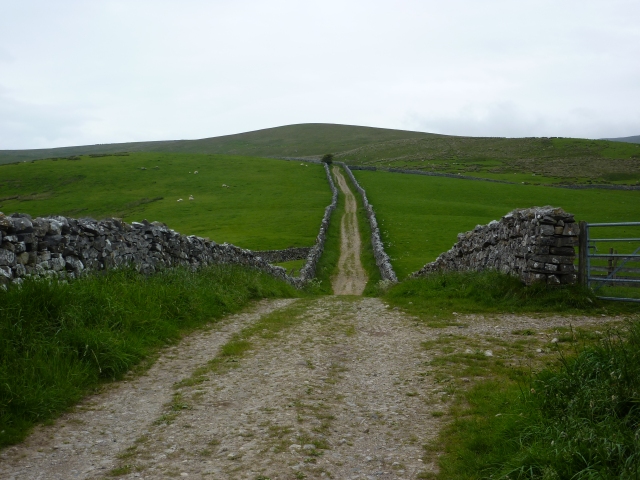 Pennine Way heading out of Horton-in-Ribblesdale

Through a series of gates, the track led me past a number of limestone scars, swallow holes and bits of limestone pavement.

The way contoured around the hillsides and with a gradual drop to meet the deep limestone gorge of Ling Gill.  This is a natural reserve which I found difficult to photograph due to the very dense nature of ash, rowan, birch, aspen and hazel  trees growing precariously on the steep side of the gorge. The whole area is fenced off to stop sheep grazing, and what you have here is I guess the original forest which must have covered these hillsides before livestock turned the countryside to what we all now recognise as the Dales.  Here is some information.

I cross the bridge and made my way towards Cam Fell.  By this stage, the rain was near horizontal, but I was kept supremely dry and warm by my 3rd Element Jacket.  A little further along, I met a group of walkers heading the other way – just about the only people I would see until I made it to Hawes.  My hands were freezing now so I stopped and put on my eVent gloves and felt the warmth coming back to my digits.

The next section being the climb over both Cam and Dodd Fells was really a slog.  It was not hard physically, but rain beat down harder and harder, with the camera put away, there is little show for the effort put.  So it was head down, with me peering through the red tunnel formed by the jacket’s hood.  Towards the top of Cam Fell,  Ribblehead viaduct and  Whernside came into view through the gloom.

Around midday, I stopped for a very quick bit to eat, sheltering from the northerly wind and rain behind a stone wall.  Ten minutes was enough to woof down some provisions to hand and on my way again.  The Way levels out for awhile as it meets a metalled road near West Cam Farm. I followed this until I forked left by a sign to Hawes.

Here the terrain changed to much more boggy ground, as the limestone country finishes. I eventually arrived at Ten End, the highest point of the day.

Walking down from Ten End

It was still raining, but starting to ease somewhat.   All the climbing for the day was done and, it was down hill all the way, steeply in some places until I met the hay meadows at Gauldy Lane near to the village of Gayle. 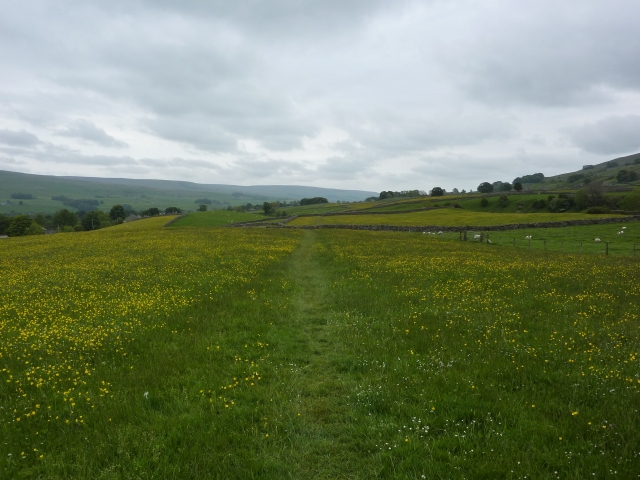 The Way dropped further and not long afterwards I arrived in Hawes, on a wet Sunday afternoon, with only a few people milling about. I decided to press onto Hardraw.   The Way now cuts through the back of town, past a small industrial estate and along the River Ure for a short distance, before crossing a series of fields through meadows to Hardraw.

Tonight I was going to pitch at the back of the Green Dragon Inn in Hardraw. Famous for having the Hardraw Force waterfall a short walk away along a private footpath owned by the inn.

At camp - The Green Dragon Inn

I set up the tent, grab myself a quick shower and settled in the bar for a well deserved drink and bar meal.  I found out that there was a new bus service from the pub to Garsdale Railway station which would save me a 6 mile walk along a road in the morning. See https://markswalkingblog.wordpress.com/2011/06/14/the-little-white-bus/

Back at the tent, I spent an age trying to locate the leak in my sleeping mat, but eventually gave up and spend another uncomfortable night lying on my deflated mat – see my report on this problem – https://markswalkingblog.wordpress.com/2011/06/07/further-issues-with-the-poe-peak-elite-ac-sleeping-mat/

In the morning after packing up, I walked up to Hardraw Force which was located at the back of the little campsite.

After visiting the waterfall  I caught the bus up to Garsdale Station for the journey home.

In summary, a varied walk in both scenery and weather through some of the best bits of the Pennine Way.  The limestone country is outstanding, of which you can never tire.

Gear was put to a good test and some was found wanting, more about that in a future post.