Posted on September 8, 2011 by markswalkingblog

This is the 2nd post of this as it seems that for some reason it may not have  posted properly:

I was contacted by Adam Smith of Go Outdoors to see if I would be interested in testing some gear. I thought about this for a while and contacted him to say yes. All the gear in the past has been my own purchase, so I thought I give it a go and he said I could be as honest as I wanted to be. Having said yes, I said what would you like me to test? Adam replying that they are testing waterproofs at the moment and here is the list, choose anything under £70.

Now this interested me and after careful thought, I decided that it would be a good exercise to see how well gear could perform at the budget come good value end of the market, as I  (and I hope I don’t sound like a gear snob), tend to shop at perhaps the other end. This is mainly due to the fact that if you are backpacking in the winter or in challenging terrain, you have to rely on higher specification products and they tend to cost more. Not to say that I have not had expensive failures or that I have some good experiences with gear at the more value end of the market.

I picked the Knoydart jacket, as it was manufactured using Berghaus’s waterproof membrane AQ2 and I have a pair of Deluge waterproof trousers made from this. Although they are not my choice for the summer, I have found them very good during the winter, when I am wearing them most of the day and they retail at a very competitive price. The jacket duly arrived about two weeks ago and this is very much first impressions based on wearing the jacket  at the Monsal Social Meet and a test last weekend. 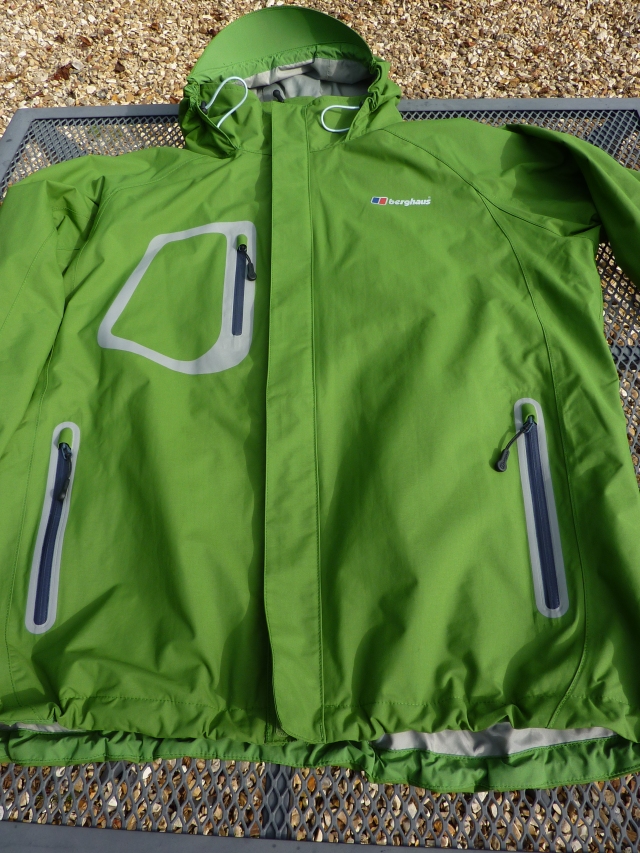 There was some quite heavy rain on the Friday and light showers on the Saturday when out walking. Certainly, I would be looking to do a more long-term report in the future. The jacket in a fetching Lime Green colour has a rather contemporary look to it and has some nice designs features, which meant I did not look out-of-place with all the guys wearing Rab, Mountain Equipment or Montane. The thing was that their jackets were £150 upwards, mine cost £59.99, but of course looks are only a small part of it, the garment has to be fit for purpose.

The Knoydart Jacket is a Berghaus exclusive to Go Outdoors, and weighs a 575g (20oz) in Large which apart from my Paramo Jacket is quite a lot heavier than my other jackets. As I said earlier the jacket is made from AQ2 , which is 2 layer material, and is probably not as breathable as Goretex or eVent, but of course this jacket is substantially cheaper. There are the 3 outside pockets all with water resistance zips, although none large enough to take a map.

There is a mesh inside pocket. The Knoydart has a full length water-resistant zip under a double storm flap, so there should be little or no water ingress through this route. The hood has a toggle adjustment at the back and an oversize peak which gives good visibility when the hood is tightened down, this by means of two toggles each side of the hood. The hood can be rolled away, but I never bother doing this with my jackets. One thing I do think would have been useful would be a press stud fastener or similar to give a rather snugger fit around the top of the neck.  In heavy driving rain, water could I suspect enter at this point .

There is a draw cord hem which can be adjusted with two toggles and the jacket is longer in length than many modern jackets. The sleeves have adjustable velcro cuffs.

The jacket is comfortable to wear and easy to adjust and the heavier weight gives a sense of security. The jacket is loose enough to wear a base layer and fleece underneath it in comfort. Out in the field (the camping field) at the Monsal Meet, the Knoydart seemed to fit the bill, it was pretty wet for a while setting up camp, standing around chatting and walking to pub later on.

The next day I went walking and it coped fine with the few light showers I encountered . To test its breathability, on Sunday I wore the jacket in heavy rain  and ran for a couple of kilometres to build a good sweat up. This is the hardest test for a waterproof jackets as it can be difficult for condensation to move through a membrane when the jacket is covered in water droplets. There was, not unsurprisingly some dampness inside the garment, but in fairness I would see that in my Montane Atomic DT jacket as well. I do not own an eVent jacket so I cannot make a comparison with one of the most breathable fabrics.

My OMM Jirishanca backpack does not obscure the pockets and they are easy to access during a walk.  So far, I conclude that the jacket looks good, it is comfortable to wear and for the price it seems very good value for money. I don’t like the gap at the top of the neck , it does not pack down that small and weighs rather more than I am used to, but for someone looking for a contemporary looking jacket that is functional, on a budget of less than £60, you won’t go far wrong. Details of the Berghaus Knoydart jacket can be found here – Go Outdoors – Berghaus Knoydart

What I like:  Price, contemporary look, water-resistant zips, hood

What I don’t like : Loose fitting at top of neck, weight, pack down size, no map pocket.

What I would recommend it for: Day walks and general use as a waterproof where strenuous activity is not envisaged.   Could be used by those on a tight budget for backpacking but there is a weight penalty if carried.