Posted on September 9, 2011 by markswalkingblog 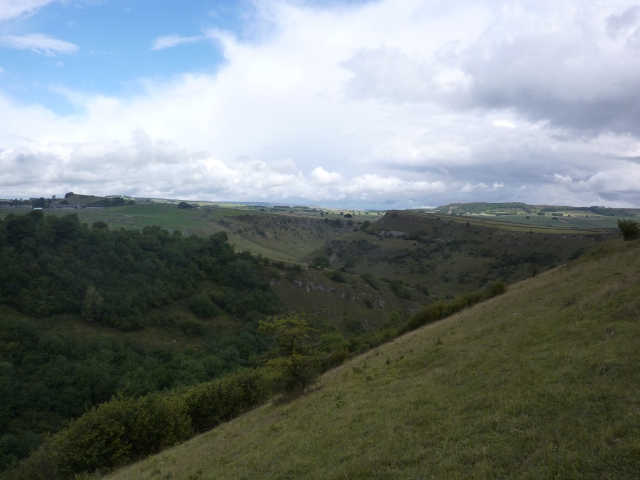 I undertook this walk as part of the Social Meet at Monsal over the August bank holiday.  Terrybnd had recommended Wardlow Hay Cop to me as a beautiful spot away from the crowds that tend to walk on the Monsal Trial.

I set off in the morning after breakfast in much better weather than yesterday’s rain. This was to be a relatively gentle walk, in the White Peak, an area in which I have walked little with its rolling hills and steep limestone valleys in stark contrast to the bleak remoteness of the Dark Peak, an area I know much better.

I stopped to take a few photographs of Upper Dale and Cressbrook Dale, as James from Backpackingbongos came along with Reuben his dog.  He was going up to explore Fin Cop and we wished each other a good day’s walking and we would meet up later.  From Monsal I took the steep path, pretty slippery after the night’s rain down to the viaduct and onto the Trail itself.  This is the course of an old railway line and has been made into a very popular walking and cycling route. It is very easy-going and goes through some attractive scenery. 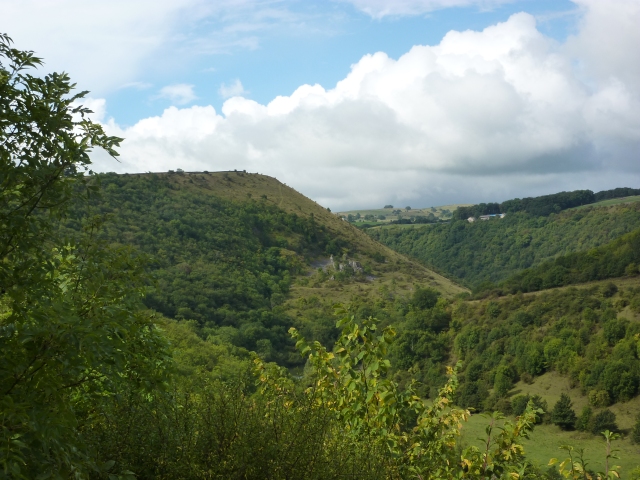 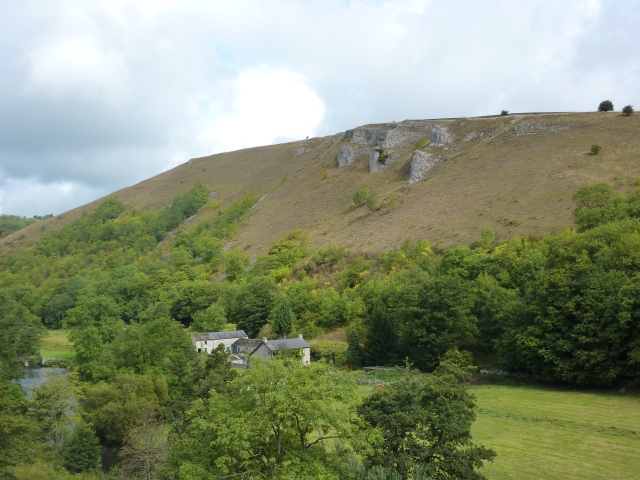 I reached the footbridge over the River Wye (no not the one straddling the English/Welsh border) and spied Cressbrook Mill, one of the most significant buildings of the industrial revolution, strange that in such an attractive place, were planted the seeds that would literally change the course of world history and lay the foundations for the success of industrialised nations.

Cressbrook Mill at the heart of the Industrial Revolution

The Mill was built by Sir Richard Arkwright in 1779 to produce cotton.  Arkwright considered by many to be the father of modern industrial factory systems, with his inventions being a catalyst for the industrial Revolution.  Arkwright had built earlier factories in Preston, where he perfected his systems, but it is inspiring to know that it was from his factories like the one in Cressbrook , that the industrial revolution was born.  Rather disappointing is the fact that this great place of revolution is now private apartments.

I crossed the footbridge, adjacent to the pretty weir and natural limestone wall, where free climbers were practising their skills.

The path follows the line of the Mill and appears on a minor road. I headed up hill, through the steep wooded valley up to Ravensdale Cottages, hidden away deep in this Dale. 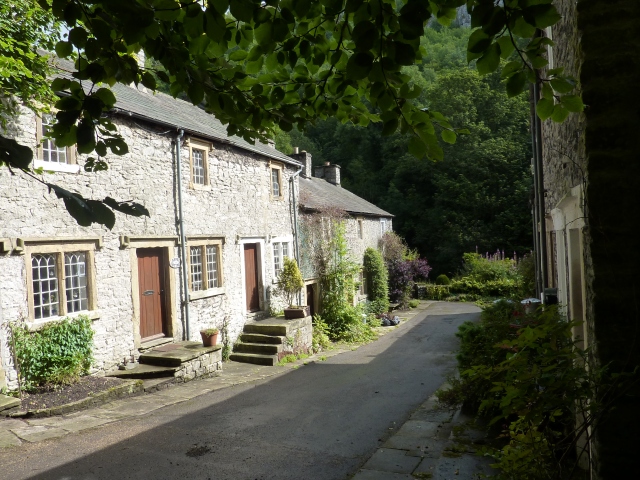 After the cottages, I took a slippery muddy path, climbing steadily and arriving at a parting of the ways, where I met a number of my fellow backpackers, who were on their way to the pub at Litton.

I was not entirely sure as I took the top path, how I was going to get to the trig point at Wardlow Hay Cop because no path was marked on the map.  However above me I saw a small path which back tracked in the direction I came from. I took this and found what I was looking for, a pedestrian gate in a straight line of fencing, which by the direction of my compass would take me toward the trig point. From the gate, you get an impressive view looking down Cressbrook Dale

A short pull up hill, and I arrived at Wardlow Hay Cop trig point, where I stopped for some lunch. My pictures really did not do justice to the beautiful scenery in the Nature Reserve, which I would say would be even more beautiful with the early summer bloom of wild flowers which by now had faded. 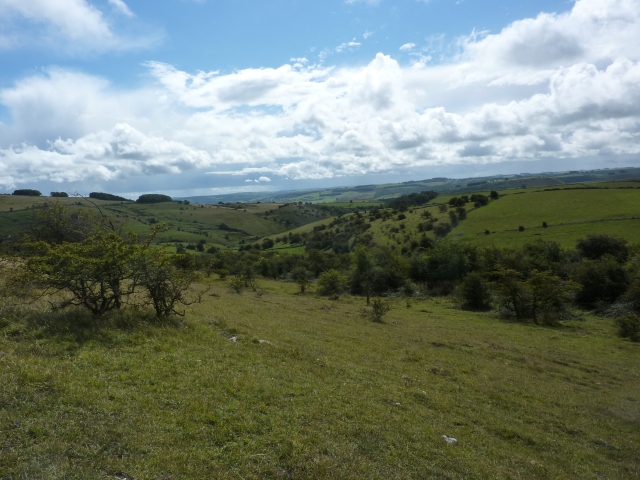 Walking from the trip point, I made my way east, through fields of cows and sheep and on to a rough track that led down to a minor road cutting through Hay Dale.   Making my way along Castlegate Lane, I took a footpath on the left leading over Longstone Moor.

I carried straight on through several fields, squeezing through gaps in the stone walls which allow slimmer walkers ( I was OK !) through, but discriminating against the more rotund walker, who would definitely find issue with the tiny gaps. These are just wide enough to get through, but will stop sheep trying the same.

The path contoured around a small wood and I headed down hill where I  turned onto a green lane, splashed with the purple colour of Rosebay Willow herb (Epilobium angustifolium)

Just before the green lane emerged onto a road I turned south and headed downhill towards the hamlet of Little Longstone walking through a number of small fields, fringed with wild flowers amongst limestone outcrops. 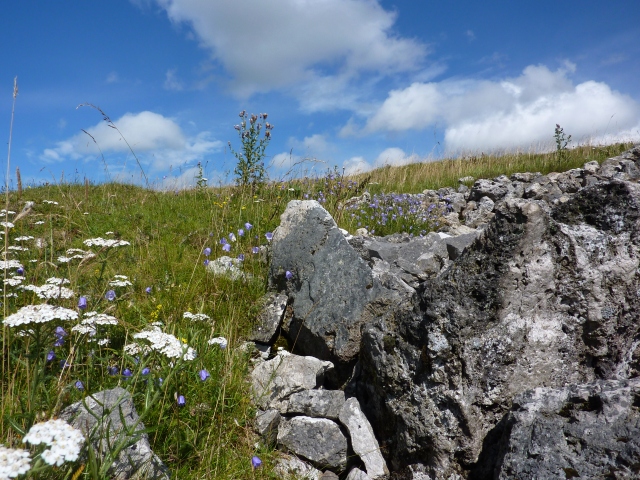 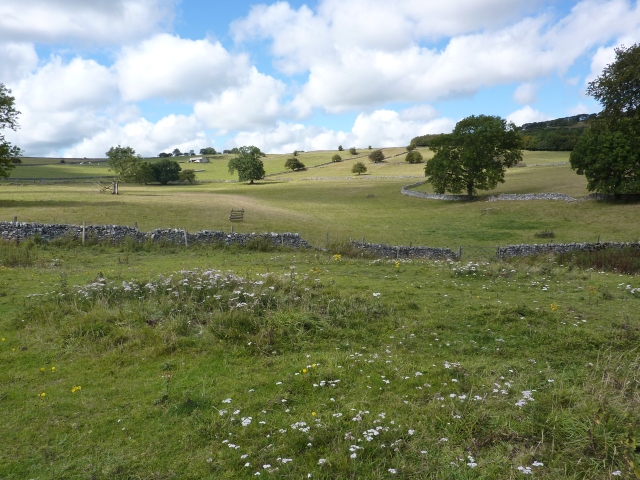 The path found its way to the Woolpack pub, where I resisted the temptation of a pint and walked back to have a nice cup of tea in gardens of the cafe over looking my start point at Monsal Head.