The Cairngorms with Terry and Chris – nearly!

Posted on April 16, 2013 by markswalkingblog 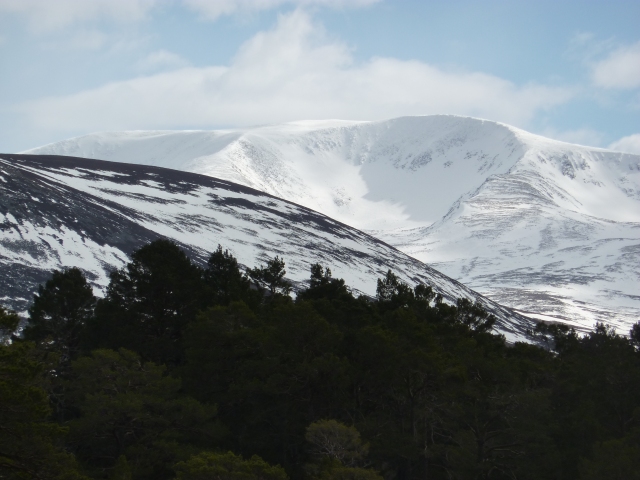 As a backer of the Kickstarter project –  “The Cairgorms in Winter” my reward/prize call in what you wish was to spend an overnight with Chris Townsend and Terrybnd  in the Cairngorms.  Terry I know well, but Chris like many a backpacker is someone I have got to know over the years through his books and his monthly output in TGO, although I have never met him in person.

The forecast looked good and I was looking forward to a weekend’s walking after trying to get out a number of times in the dismal winter weather we had.  Work in January and February kept me from going out. So great – get packed drive up on the Friday, spend the weekend in Cairngorms and see some customers on the way back – ideal.

After a six and half hour drive in brilliant sunshine I arrived at Aviemore and stayed in an excellent bed and breakfast – The Old Ministers House. I must say that it was one of the best I have ever stayed in with a great breakfast and spotlessly clean accommodation.   Shelagh who owns the B&B was pleasant and very helpful allowing to leave my car in the drive and my laptop and stuff for business in her office.  If you are ever that way please check the place out, it is really one of the best.

Friday evening I met with Terry in the bar of the Cairngorm Hotel for a catch-up and a good natter about his adventures filming, what gear has been working for him and blogging in general. I hadn’t seen Terry since August so there was plenty to talk about.

Our plan was meet at the Mountain café in town the next morning with Chris and walk up to Loch Einich This was due to Terry suffering from an abscess on his back which had turned nasty and he felt that to do any more would be a problem for him.  It would have been nice to spend some time up on the Plateau, but it did not worry me, getting out and about in good company was more important.

After having a meal I bid Terry good night and see you in the morning.

As I was tucking into my excellent Scottish breakfast the next morning, I received a text from Terry, which rather caused the whole weekend to take a rather drastic change of course. Chris had been up  all night with a nose bleed which would not stop, had been to the hospital in Aviemore, got back home very late and was to see the doctor later on  at 2.30 pm and see if he would be OK . Reading this I was naturally disappointed, but stuff happens and it can’t be helped and I was hoping that Chris was not too bad, sounded a bit worrying !

I drove over to see Terry at the nearby campsite and we decided it was best to walk a short way in Rothiemurchus Forest and set up camp in a secluded spot that Terry had spied a couple of days before when filming. Perhaps Chris would come along later. Terry and I spent a pleasant couple of hours in the warm sunshine talking, brewing up and having an early lunch. Terry is easy to get on with and with the amount of time he spends out in the year is a good source of info and advice. We then pitched our tents and I followed Terry as he found some suitable locations to film.  For much of the day I sat in the heather watching the birdlife and scanning the wonderful mountain scenery through my pocket Leica binoculars.

Terry in the new Force 10 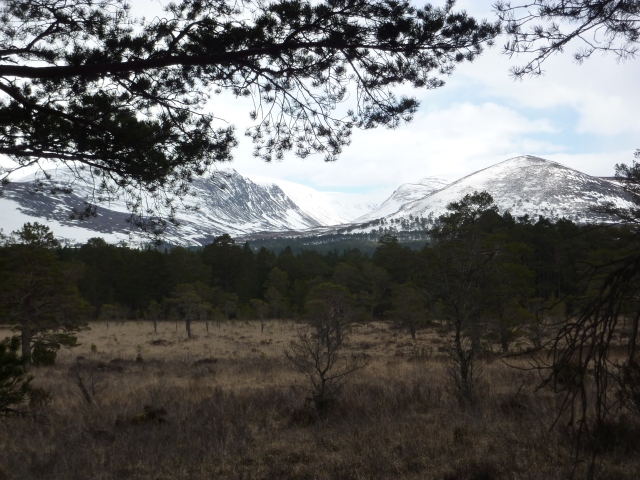 The view from our camp towards Lairig Ghru 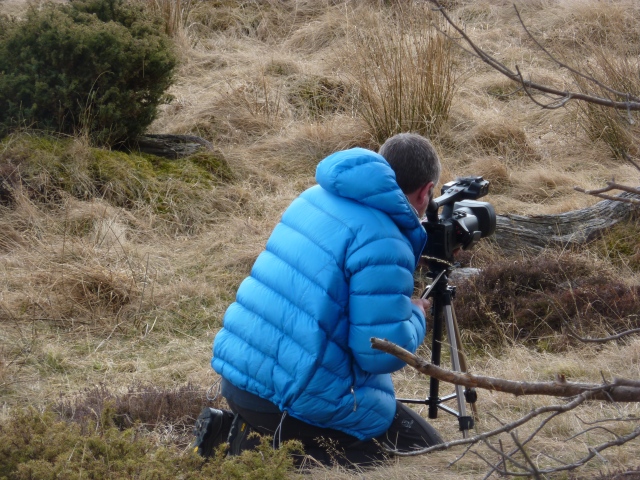 Terry sets up for filming

Weather on the change

I guess this was not what I had planned to be doing but it was rather relaxing in the sun not doing much but drinking in the scenery and I find that “at camp” is just as important and enjoyable as the walk itself.  Chris then text us later to say that he had to tried to find our little hide away but failed to find it- his nose had started bleeding again and was going back to the hospital.  That was that !

Terry and I decided to walk down to Lochan Deo to do some filming and as we made our way down to the Lochan in the late afternoon sun we observed a herd of Red deer moving quickly across our path and into the dense forest the other side. It happened so fast that we barely had time to get our cameras out. But this brief glimpse of these magnificent animals was a great end to the day. 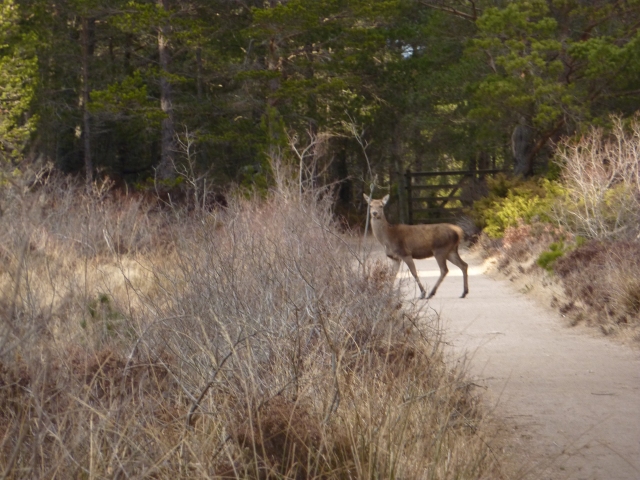 Terry then spent some time filming the tranquil Lochan, before making our way back to our camp. 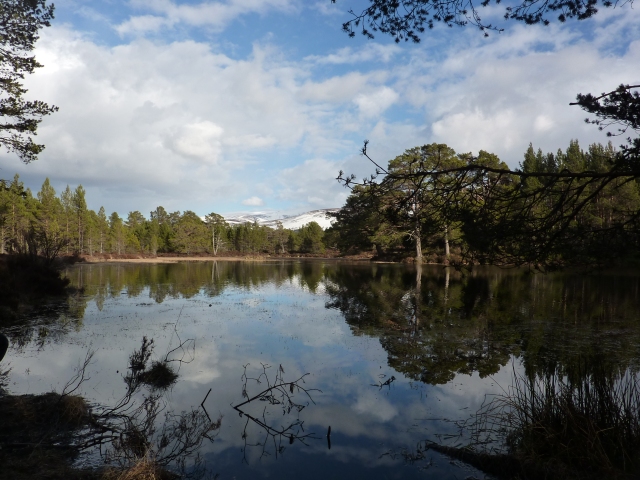 Hoping that  we would see more of the deer, we scouted around  but were disappointed not to get anymore glimpses. By now the day light was fading and it was time to get dinner on and make ready for the night. The temperature had dropped off sharply and Terry joined me with his sit mat while I cooked dinner. Terry took large swigs of red wine from his hydration bladder or maybe with the contents de-hydration bladder. The cold chased us into our tents and as I zipped up my Hilleberg  I could hear the soft patter of snow- flakes falling on the tent fabric. Terry had gone back to his tent to cook his meal and told me that I was out pretty fast as he initially thought my snoring was a call of a deer – bloody cheek !

After a good night’s sleep (you can’t beat an Exped down fill mat for warmth and comfort) I brewed up and had my porridge.

Looking out the tent door there was  light snow falling , quite a change from the day before. 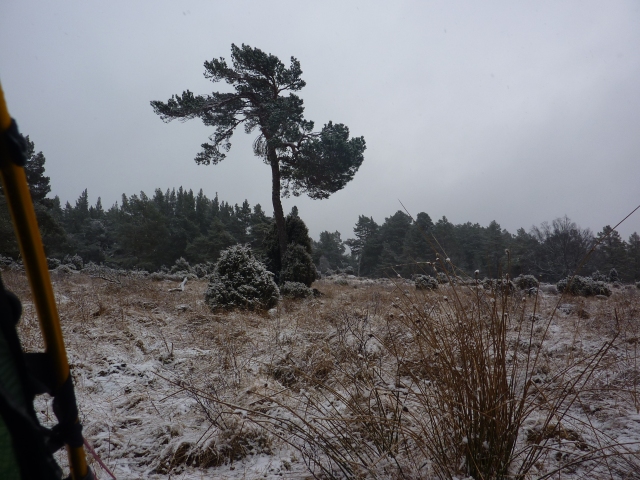 I walked over to see Terry who was brewing up and we decided that we would walk back to Aviemore and have a late breakfast for Terry and a early lunch for me at the Mountain cafe. We finished our little trip with a giant all day breakfast, there was enough to keep me going until 8 in the evening.  Whilst the trip didnt go to plan, I enjoyed my time with Terry and look forward to meeting Chris later on in the year.

20 Responses to The Cairngorms with Terry and Chris – nearly!