It was a trip I couldn’t wait to start, five days in the Lakes, with 4 nights wild camping and meeting up with Terry Abraham and Chris Townsend for 3 nights. We were to meet up on Bleaberry Fell as last year . The weather was set fair and good company and fine walking was assured.

I stayed overnight on Saturday at Burns Farm, Thelkeld, so that I could leave my car safely until Thursday. The site charges £3 per day for parking your car which I thought was reasonable.

After a fairly disturbed night listening to a world-class snorer some 20 feet away from me, I awoke to find a dry, cloudy and pretty humid day, without a breathe of wind.

Packing up after a hearty breakfast, I left the car safely opposite the owner’s house and made my way down the tiny country lanes towards the start of the Coach Road, a track which winds gradually around Clough Head. My route today was to climb to the top of Clough Head, up onto the ridge and walk over the Dodds, to Helvellyn and then camp up on Nethermost Pike for a spectacular sunset – more about that later. 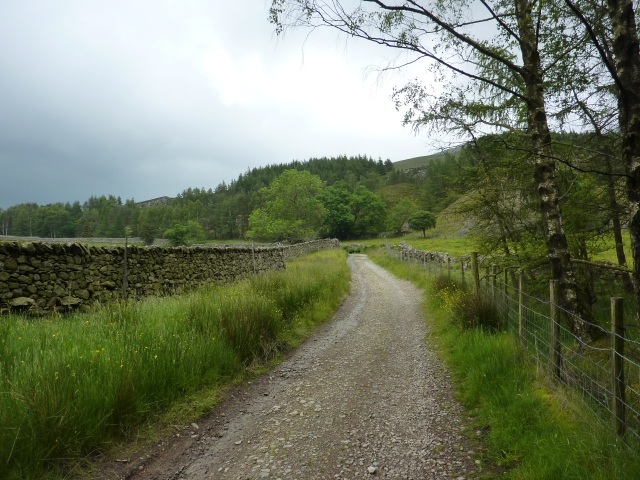 Start of the Coach Road

With 5 day’s worth of food, my pack was heavier than normally for a trip in the hills and with no breeze, it was a muggy start to the walk. As I didn’t need to get to Nethermost Pike at any particularly time,  I could take my time and saviour the landscape. Leaving the Coach road I headed up to Clough Head, along a stream with small waterfalls dotted along its length. With no breeze, humid conditions, midges, a heavier than normal pack, I can’t say that it was a pleasant climb.

Once I was on the ridge, a breeze picked up, I cooled down a bit and the midges disappeared. Lunch was taken at Calfhow Pike before turning south to walk over the Dodds.  By now the cloud was coming down, obscuring the view from time to time.

Looking over to Bleaberry Fell. My next day’s camp

By the time I had scaled Watson’s Dodd, the cloud was becoming thicker, fortunately the ridge was easy to follow even in dense cloud.  I took some photos of the summit cairns as I walked over them one by one, but they all looked the same.  I was now wondering whether I would see anything at my camp on Nethermost Pike.

I forget which Dodd this was! 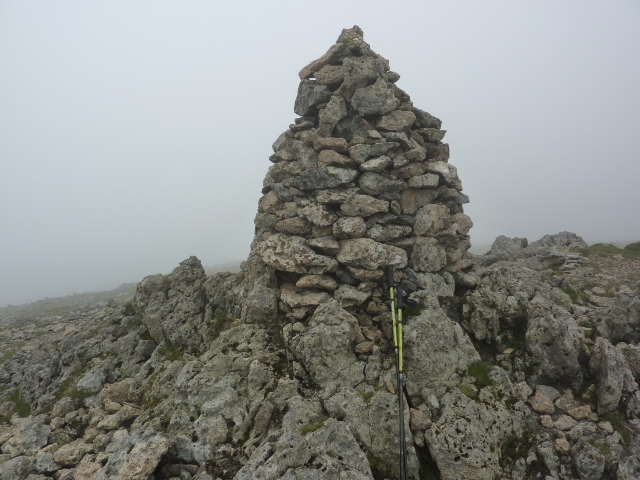 By the time I got to the shelter on Helvellyn, I couldn’t see more than 10 metres in front of me.  There were four lads, who had walked up Striding Edge to get here, but no-one else other than us on a Sunday afternoon at 4 o’clock. How many times does that happen? 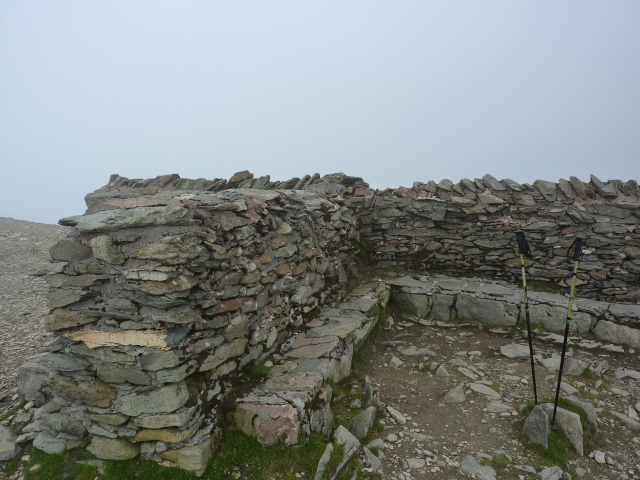 I needed water for the evening as there was is little to be had since Clough Head .  Terry had suggested in an email prior to the trip, that there was a spring about 500 metres from the summit. Fortunately I had put the grid reference into my Garmin and I walked off into the gloom, glad that I did  as I would have never found  it otherwise. Then a strange happened just as I reached the spring, the clouds parted and the sun come out strongly as if lighting up the way to the water source. I sat down in the sun and drank deeply the cool fresh water before filling up my Platypus and Water Sawyer pouches.

As I left this little oasis, the clouds came back down blanketed my way again.  I retraced my steps back to the summit and walked along the edge to Nethermost Pike, squinting to see any view that might be had- there was none!   I camped on an outcrop, looking at Striding Edge, not that I could see anything.

Pitching my Stratospire quickly, I settled down for the evening, not much to keep the doors open as the cloud now had blocked everything out.  As I got into my sleeping bag, I heard the pitter patter of light rain on the flysheet.

An early night, led me to wake early the next day, to a fantastic view, the view I was looking for the night before, but it was well worth the wait as the following photos show. 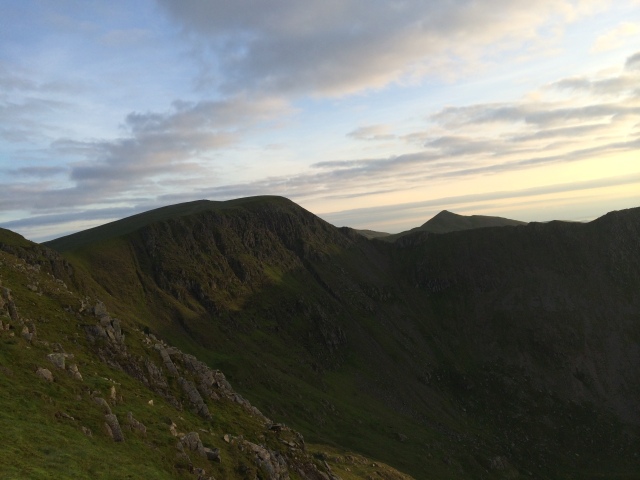 Looking down at Hard Tarn

The weather forecast on Radio 4 promised a much better day with long sunny spells and I set off down the well-worn path leading from Helvellyn to Thirlmere. On the way down I stopped several times to speak to early walkers on their way up, and a chap from Fix the Fells who was carrying out work on the Bad Step on Striding Edge to stop path erosion.  There were some fine views along the length of Thirlmere reservoir.

Walking down from Helvellyn 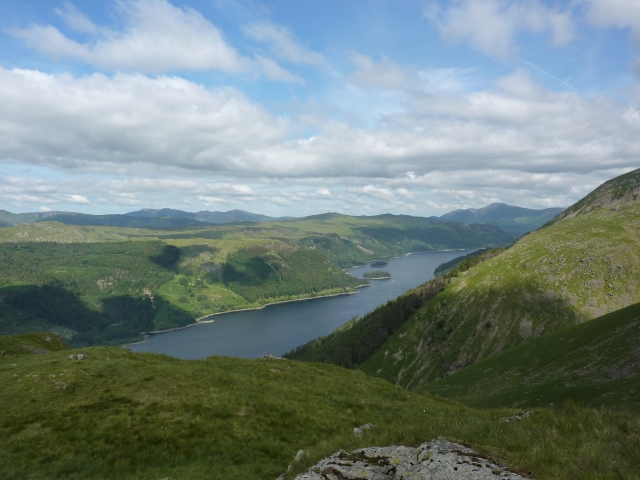 Reaching the bottom of the path, I turned left to walk a short distance through woodland to arrive at the road at Wythburn.

Crossing the main road here I  walked along a narrow lane in lovely warm sunshine to a footpath climbing Birk Crag.  The path levels out at Harrop Tarn and by a ford there I had a long lunch sunning myself and taking in the views.

The next stage was through the forest, following by a hot climb out of the valley and back onto the fells. It was really warm and the sweat poured off me, it was humid and no breeze was to be found. 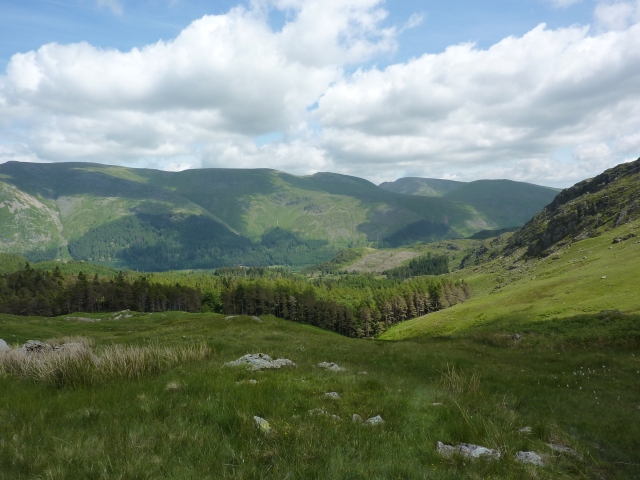 Eventually after stopping a number of times to drink, I made it out of the forest following the path towards Blea Tarn. Reaching the top of the ridge I turned right towards High Tove.

This area is more like the Pennines than the Lake District and it’s bogs remind me of the Peak District, particularly as I went up to my knees in the thick gloopy mess not long after starting along the ridge.  A text from Terry confirmed that he would be there around 3 pm. I estimated that I would have another couple of hours and Chris would arrive around 7-ish

As I trudged along,  following the fence line over these fells, I was reminded what Wainwright in his guide to the Central Fells says about one particular fell on this ridge. “Peak baggers and record chasers may have cause to visit the summit, but other walkers may justifiably consider its ascent a waste of precious time and energy when so many more rewarding climbs are available, for the flat desolate top is little better than a quagmire, a tangle of swamp and heather and mosses, as is much of the surrounding territory”. If the sun wasn’t shining so brightly, I may have agreed with him, but his criticism seemed harsh on a day like today.

Over the fells I walked, Armboth Fell, Middle Crag, High Tove, High Seat, (at least I was ticking off the Wainwrights) until I starting climbing the last fell of the day – Bleaberry Fell.

Nearing my destination, I saw Terry wandering around on the top, I waved a few times and eventually he saw me and we walked over to his chosen wild camp spot.  Terry decided quite rightly that we should camp on the lee-ward side of the hill as there was a strong North Easterly wind blowing and he had found a little sheltered spot.

He had set up his tarp already and we walked back down from where I came to collect water from a small nearby tarn.

I pitched my tent, brewed up, and caught up with what Terry had been doing in the last few weeks.

Putting some more water on for my evening meal I could relax after a hard day’s backpack.  Later on we walked over to the summit cairn to see if we could spy Chris coming up from Keswick.  Soon we saw a solitary backpacker climbing towards us. Chris, like me earlier on, was sweating profusely – the humid weather and steep climb out of Keswick via Cat Gill ensured that. 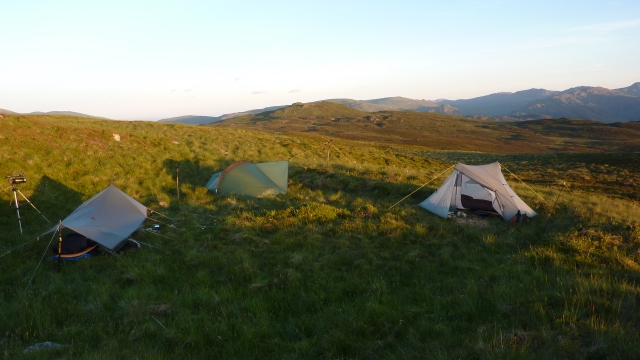 It was good to see Terry and Chris again and many stories were swapped,  and like the year before, we were treated to another excellent sunset, before retiring to our beds. I slept with the doors open, it was a warm evening and the forecast for next few days promised more of the same. 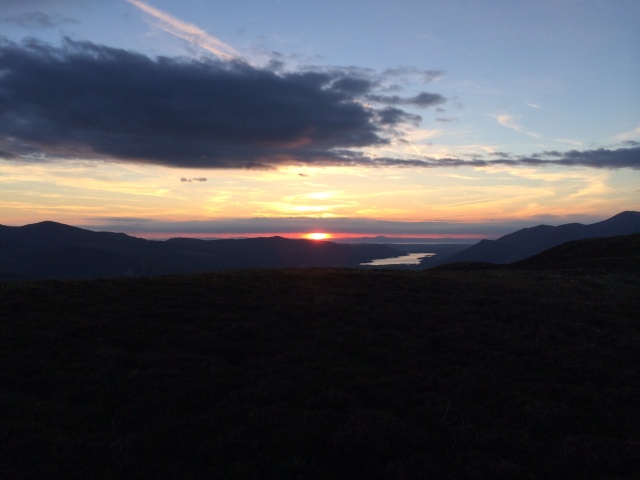 Sunset from Bleaberry Fell with Bassenthwaite Lake in the distance.

20 Responses to A Lakeland backpack – Part 1