Posted on September 24, 2014 by markswalkingblog 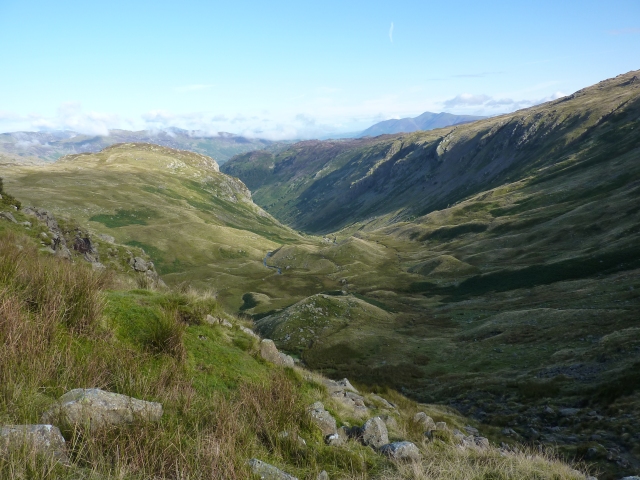 This is the second and final part of my recent trip to the Lakes. First part is here

Friday couldn’t have been a more different day. Gone was the monsoon and hello to bright sunshine and blue skies. I had a more leisurely start to the day and lay in my sleeping bag sipping my early morning tea as the sun started to dry the silnylon fly of my tent.

As I had changed my route yesterday I stayed there awhile cocooned in down with another cup of tea, map spread out in front of me, deciding which way I would go today. That’s the beauty of solo hiking you get to take charge, with freedom where to go, and how far you will wander that day. Not that I don’t enjoy the company of others, I do, but this is one of the benefits when you are alone you can decide.

So I had a plan, a late start, I was on holiday after all, walk up the Cumbria Way, and branch off to Angle Tarn and then almost cut back on myself to fell tops that I have never visited.  The one’s which seem to be out on a limb that I always bypass.  It would have been all too easy to go Angle Tarn, then Sprinkling Tarn, Sty Head, Great Gable etc, back to Keswick, but I did a good part of that route last time I was here in June.

The route would be more of a ramble and time spent on fell tops, admiring the views rather than a route march. I could please myself and go as far or as little as I wanted.

One other backpacker had camped near to my tent on the site, he had been up earlier than me and as I emerged from the tent, he was well on his way to filling his enormous back pack and then hung extra stuff off the ends. He was a big strong lad, I don’t know whether he was weaker when starting backpacking, but if he was, the weight he carried on regular basis must have helped him become much bigger!

I went to the smelly sock drying room and removed from the shelves my now perfectly dry and warm socks and trail shoes, before finishing my packing. On the way out I filled my water bottle and I was away.

The Cumbria Way is found at the back of the Old Dungeon Ghyll hotel.  A foreign couple asked me where the Way started, as they were having difficulty relating it to their 1:100,000 map of the Lake District. I said I was going that way, and they joined me for a while. They were visiting from  Poland and were not used to the fact that we do not have signs and way marked trails with yellow arrows as they do in other countries. They told me that they were going to walk to Scafell Pike and the Sca fell and walk back to their starting point . I said fortunately, that although we don’t have way marked trails here, where you are going the paths are like super highways and there will be plenty of people to help you if you not sure.  It was a very pleasant day, what was I say, don’t go and find yourself a better map. We parted company after I said I wanted to stop to sort something out with my pack. I actually needed a pee, but that sounded better, than wait here while I urinate over these rocks. 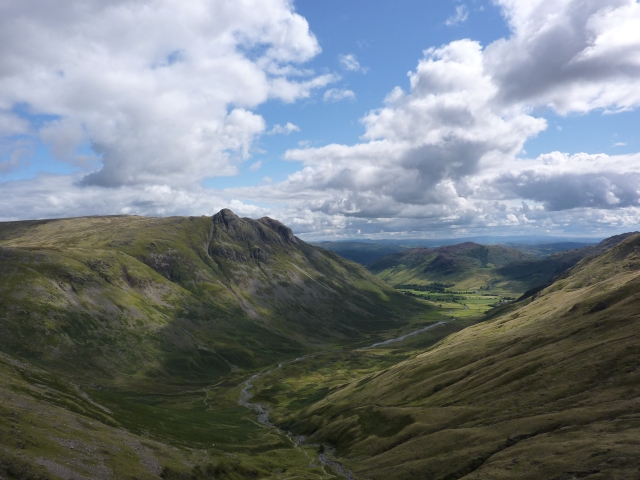 It was a stiff climb up to Angle Tarn, but with great views and glorious weather, it was not a chore in any way. At the top and as I came down the other side, some lads doing their D of E were struggling up the path weighed down by the expedition style kit list that they must carry. I don’t know who draws up these, but I always feel that if someone could spend some time looking at how they could lighten the loads of these poor unfortunate “mules”.  I am sure that they would be more likely to continue with backpacking in the future and perhaps ensure that more youngsters could enjoy the mountains and wild places without feeling that they were on an SAS training course.

They were a very pleasant bunch of lads and when I told them that they were only had an hour and half to their campsite, because I had just come from there, I could see the relief on their faces. One said that they shouldn’t arrive too early to the site as they had been told off about that before.  I suggested that perhaps they should go to the pub and sit in there at which point they smiled and chorused – we wish. I guess that the strict requirement of I.D. these days means that a sneaky pint is out of the question nowadays.

On leaving the mule train, I found a very comfortable rock, almost armchair like for lunch and basked in the sun for a while, that nagging northerly wind was still there but the sun was winning my attention.

From here I made my way to Stake Pass and then Martcrag Moor , my immediate destination was Pike Of Stickle, these fells I have never visited, as they seem to be out on a limb.

An easy climb to Pike of Stickle gave me a great view over Great Langdale where I camped the night before. Next fell to walk was only a short way, Harrison Stickle, the wind had got up by the time I reached its summit, I pulled on my wind shirt to shield me from the cold. It was a fine view from the top, I could see all the way to the familiar table top of Ingleborough some 35 miles to the south-east.

From this vantage point I dropped down a little, probably no more than 100 feet or so northwards to Pavey Ark, the path distinct to start with and then it peters out.  After half a mile I had reached the crag of Pavey Ark, with excellent view of Stickle Tarn way below me.  From here I could see a few people dotted around, but they were few and far between compared to earlier in the day. I sat for a while and admired the view. The advantage of spending your nights up in the hills and mountains is that if you have arrived early to the vicinity of where you will camp for the night, you have the luxury of exploring those surroundings in more detail or just to sit for a while.  Generally the day walker does not have that luxury as they have to get back to their car or catch a bus. Suddenly you are aware that there is no-one about anymore and you have the place to yourself. 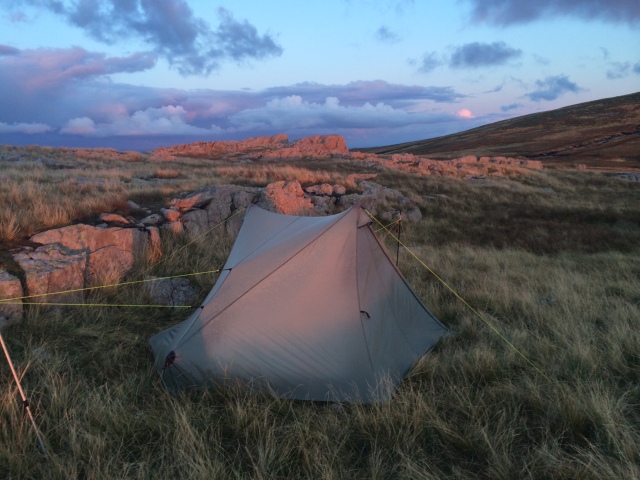 The setting sun on my tent

I planned to camp on the slopes of High Raise just down from the summit, as I did  in June with Terry Abraham and Chris Townsend . However the northerly wind was strong and this side of the fell offered no shelter. I dropped down a bit further towards the eastern side and found a flat piece of ground which provided some reasonable shelter.

The tent was pitched quickly, and a nearby small tarn provided water for a hot drink and meal. After tightening the guys I settled down for the night. It was noticeably colder than previous nights with a chill in the air. Whist still the third week in August, autumn seemed to be knocking on the door saying summer was now over.  A couple of light showers and I drifted off to sleep.

Saturday dawned rather misty with low cloud, but the weather forecast suggested a fine day to finish my trip and it was soon sunny. 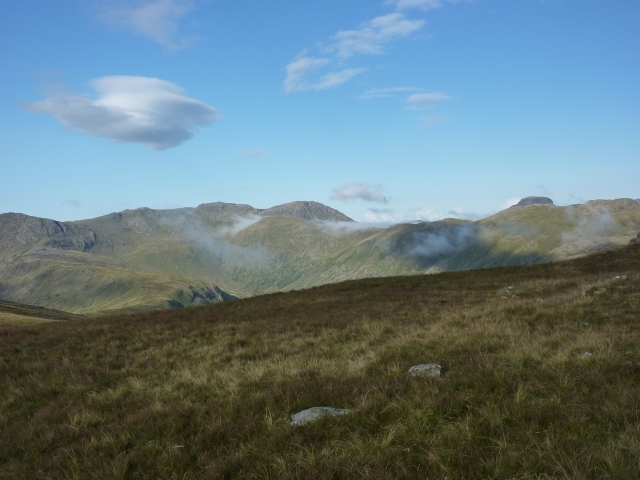 Leading down to Langstrath

After a quick breakfast I was away walking down the slope towards Greenup Gill from Greenup Edge. There are a lot of streams running from the upper slopes of Ullscarf which made the walk down rather wet under foot. There is a small waterfall about half way down to Smithmire Island where the path meets the Cumbria Way coming from the left. The path around this waterfall is steep and slippery, so I took it very easy to make sure I didn’t slip and pitch headfirst down the path.

After a while the path levelled out, and after my concerns about the last section, I tripped over and fell flat on my face, I must have tripped over a daisy as there was nothing there but I laid there, with my rucksack pinning me to the ground and laughed out loud!  Picking myself up I continued down the path until I met the Cumbria Way. It was pleasant walk along Stonethwaite Beck in warm sunshine.

I met several couples doing the Coast to Coast, but I was concerned that they didn’t seem to know where they were and they were relying not on a map but merely the same guide-book. I gave some directions as they were headed for Grasmere, but no map is not a great choice.

At Rosthwaite, I waited for the bus to Keswick, which came along after 15 minutes.  In Keswick I grabbed a sandwich at Booth’s and waited for the bus to Penrith.  Once I was on I dozed in the warm coach along the A66 until I reached the railway station.   A short wait and I was on the train back home after a great trip in the Lakes!

This entry was posted in trip reports. Bookmark the permalink.